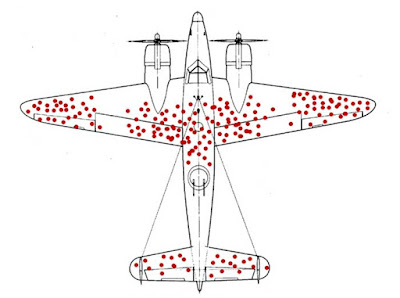 
In general, it means that people focus too much on success and miss out on those who fail, and as a result, fail to see the real issue.

One of the best-known Survivorship Bias stories II. It is related to armor reinforcement on aircraft damaged in World War II. Investigating the damaged planes, researchers decide that the most damaged parts should be strengthened. However, armor strengthening did not have much effect, the number of returning planes did not change much, and the planes continued to take damage from the same place. The mathematician named Abraham Wald, who appeared in this section, said that the research was already done on surviving planes, that the damaged areas were too strong to cause the planes to fall, that the actual research had to be reduced and thus could not be returned, and that the armored reinforcement had never been restored. argues that there should be undamaged areas. Subsequent reinforcements, such as fuel depots, are being applied to parts where no return aircraft were damaged before, and Abraham Wald seems to be right.


In another story, the number of soldiers wounded in the head after the use of helmets increased during World War I, so helmet wearing is considered unnecessary. However, it is realized later that the number of injuries caused by helmets has increased because the survivors of the helmet-wearing soldiers survived.

Traffic accident survivors who come to the hospital, always wearing a seat belt, so that the perception of the seat belt is causing the injury occurs. However, the point that is overlooked is that those who do not wear their seat belts have already died before coming to the hospital.

All this actually tells one thing. What leads to success is to know those who lead to failure.